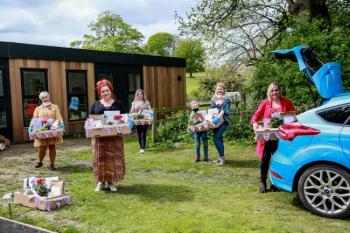 About 150 care boxes including biscuits and bunting are being distributed by volunteers to the elderly in the Darlington area.

The VE Day-themed boxes are being put together by the Pimm’s and Needles group to keep people active during the lockdown.

The boxes are wrapped in bunting and contain plants, baking sets, recipes, letter-writing kits, embroidery sets and sweets, biscuits and jam, plus books and DVDs.

Pimm’s and Needles is a community interest company with 600 members, aged 25 to 93. It holds monthly meetings in 12 locations from Durham down to Northallerton. Members have a hands-on go at craft and food activities, everything from sausage-making to belly-dancing.

“We have a group of silver members in Darlington and they were really sad when the meetings weren’t on so we’ve been looking for ways to keep them active,” said Donna Feeney, who is a director along with Charlotte Pyrah and Judith Mackenzie.

They’ve received £10,000 in National Lottery funding, and members have nominated recipients of the boxes.

“It was brilliant when we got funding for 120 boxes but it has crept up to 150 now,” said Donna. Members have made little tokens to go in the boxes, and augmented them with donations of books and dvds. Makro, the Stockton food wholesalers, gave some extras and Northumbrian Fine Foods donated boxes of gluten-free biscuits.

Distribution from Croft Village Hall began yesterday. “It has been quite a military operation,” said Charlotte, “but it will have been worth it.”