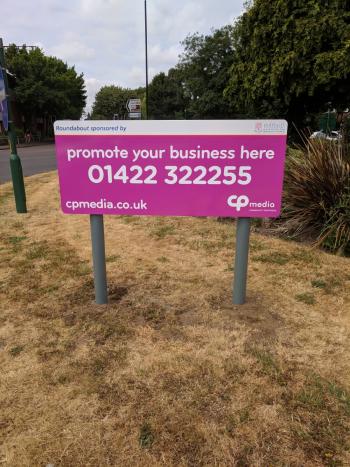 A newly revamped sponsorship scheme has been released across Solihull this month, and the Council is offering interested businesses a chance to be the first to be featured on traffic islands across the borough.

Currently working with councils in over 100 towns and cities across the UK, CP Media has recently taken over managing the initiative, and is working closely with Solihull Council to help generate valuable extra funding to invest into the local economy.  Revenue from the scheme goes straight back into the community, helping to improve and maintain the highways of Solihull.

Solihull Council’s cabinet member for transport and highways, Cllr Ted Richards, said: “This sponsorship scheme is a great way to generate additional funding to invest in Solihull.  CP Media has helped councils to generate income across the country and I’m pleased that they will be helping us too.  This is a simple way of boosting our income and supporting local businesses and the economy too.”

The upgraded and larger hardware has just been installed in preparation for new sponsorship boards, and while just thirty locations are currently available to prospective sponsors, that number is expected to double during phase two over the coming months.

Phase 1 of the scheme is now complete, with phase 2 well underway. Planning permission is currently being sought for many brand-new sites which could soon be added to the portfolio of viable roundabouts available to sponsor, as the council is keen to ensure as many businesses as possible have access to the opportunity. And it promises to be a popular scheme, as Solihull’s only official sponsorship signs are seen by millions of people every year, found in some of the area’s busiest hotspots - Birmingham Airport, Birmingham Business Park and the NEC to name just a few.

Any business interested in sponsoring one of Solihull’s traffic islands can get in touch with CP Media on (01422) 322255 or email info@communitypartners.co.uk for further details.